Monsters are the real bane of movies and have been since the beginning of cinematic history. From Giant spiders to giant dinosaurs there’s a whole wide variety of monster movies. My favorite monster movie is the original 1954 Godzilla.

If you’ve only seen the American version stating Raymond Burr I highly recommend watching the original Japanese release of Godzilla.

This site uses Akismet to reduce spam. Learn how your comment data is processed. 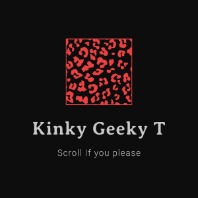 I’m really geeky about things and a little bit kinky! I’m a full time mom of two teenagers and I live on the East Coast. I’m very active with my children and advocate for them as they both have special needs. I love movies especially horror, sci-fi, fantasy, and drama. I like coloring, Godzilla, coffee, painting (mostly acrylic), video games, reading, anime (especially Black Butler).

If you took the time to check out my blog thank you so much.

Where a little insanity goes a long way

Tales from a collared babygirl

Welcome to the Candii club,

Remember when Life was just an Adventure as a Child?

Everything You Need to Know About Horror

Journey to become a strongwoman

Tales From the Snark Side